China Glaze All Aboard Collection 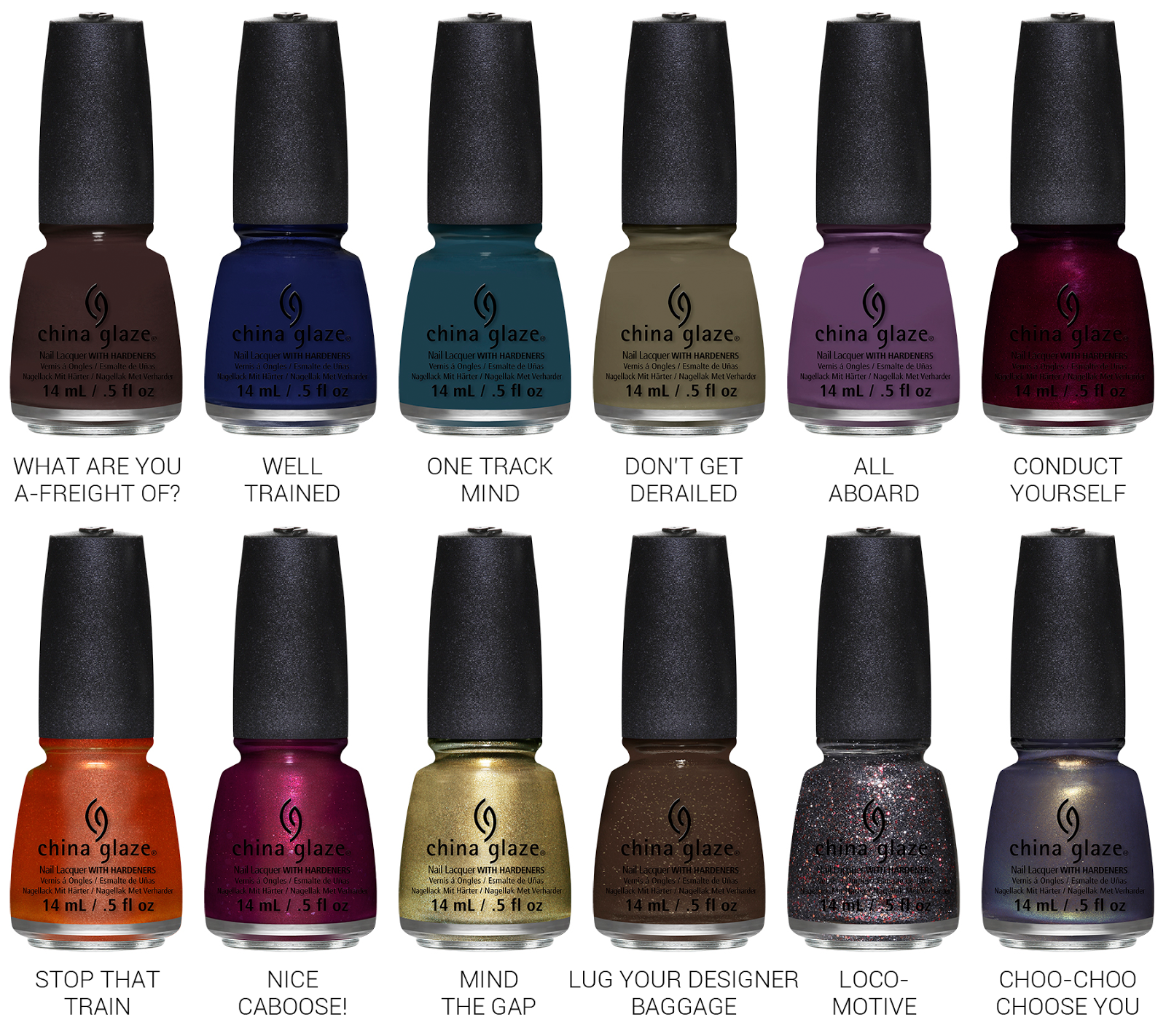 Move full steam ahead with China Glaze® All Aboard collection

Cross-country train travel – it channels romantic images of club cars, elegant style, and travel at a less frantic pace. This fall, pack your bags and get ready for a colour adventure with the China Glaze® All Aboard collection. Inspired by vintage railway travel, the adventurous palette includes 12 new crèmes, shimmers and glitters, each filled with mystery and intrigue.

The China Glaze® All Aboard collection includes: 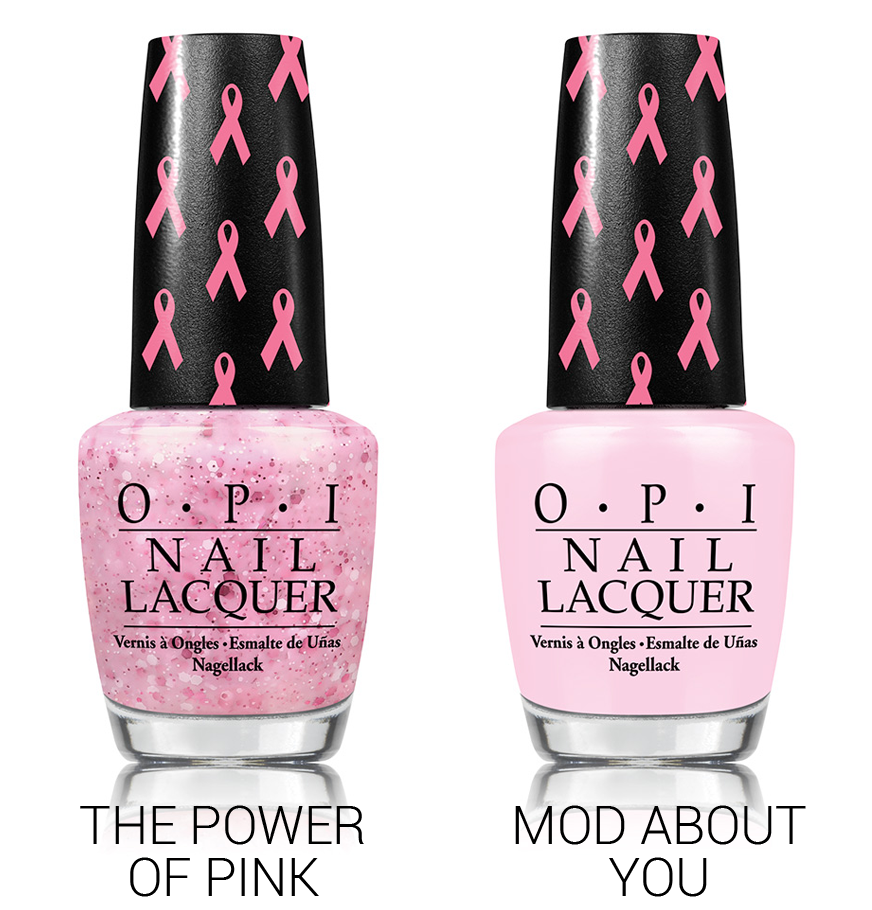 OPI announces the launch of its eighth annual limited edition Pink of Hearts promotion, a duo pack featuring a new pink confetti glitter hue The Power of Pink alongside the classic light pink crème shade Mod About You. Pink of Hearts 2014 will also include a pink glitter nail file with pink-ribbon charm.

This duo pack is designed to raise awareness for the fight against breast cancer. In 2014, OPI will donate $25,000 to Susan G. Komen® in honor of Breast Cancer Awareness Month (October). OPI will also donate $5,000 to Rethink Breast Cancer in Canada.

Pink of Hearts 2014 includes two shades sold in one pack – the soft pink Mod About You and the glittery The Power of Pink. This sparkly lacquer features a sheer pink base packed with both micro and macro confetti in light and dark pink hues. The Power of Pink can be worn either alone or layered on top of Mod About You as an accent. Each bottle features a special pink ribbon cap wrap in support of breast cancer awareness. Pink of Hearts 2014 also offers a pink glitter nail file with pink-ribbon charm to keep nails perfectly shaped.

Mod About You and The Power of Pink feature OPI’s exclusive ProWide™ Brush for the ultimate in application. Pink of Hearts 2014 will be available September and October 2014 at Professional Salons, including Beauty Brands, beautybrands.com, Beauty First, Chatters, Dillard’s, Pure Beauty, Regis, Trade Secret, ULTA and ulta.com for $16.95 ($21.50 CAN) suggested retail. 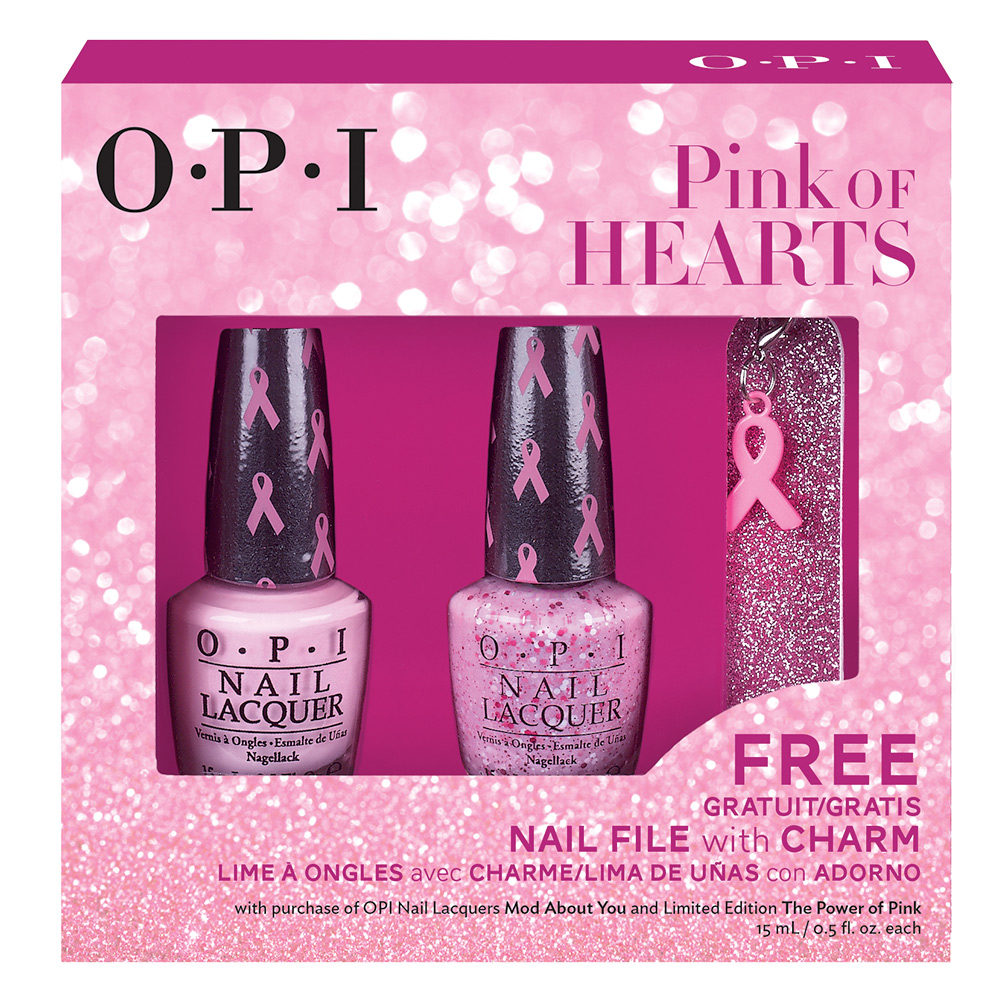 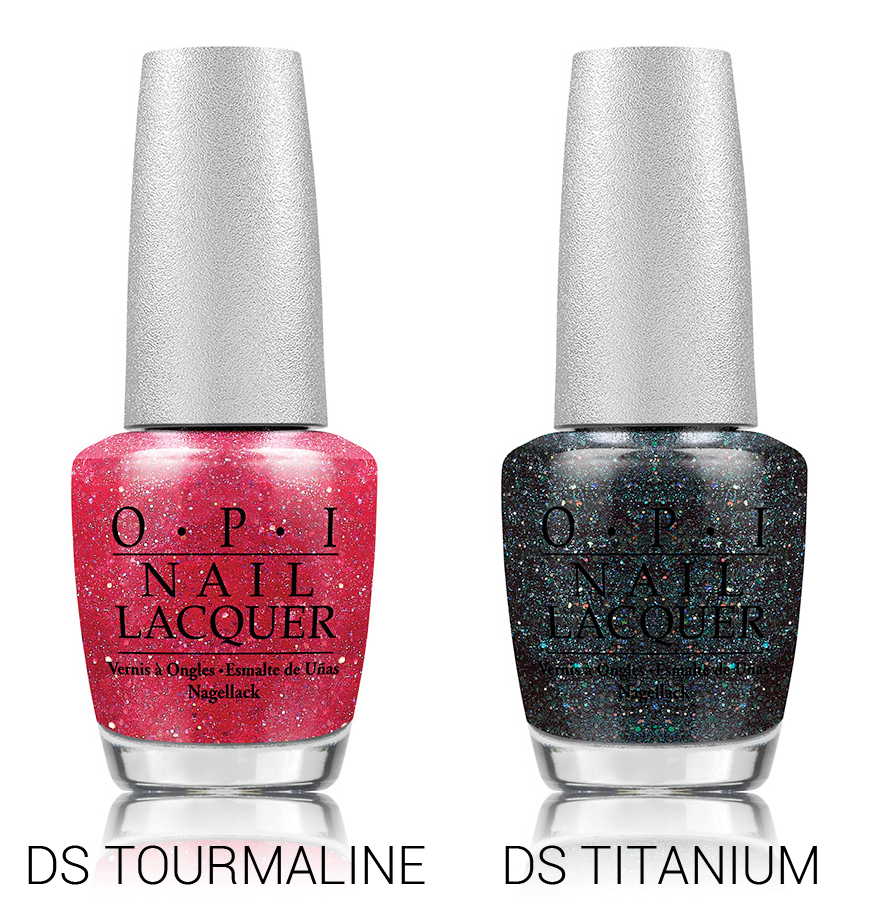 Designer Series by OPI nail lacquer shades each feature OPI’s exclusive ProWide™ Brush for the ultimate in application. DS Polished Quartz lacquers should be worn without Top Coat for a semi-matte finish. DS Tourmaline and DS Titanium will be available beginning September 3, 2014 at professional salons, including Beauty Brands, Chatters, Dillard’s, Regis, ULTA and ulta.com for $12.50 ($14.95 CAN) suggested retail for each nail lacquer. 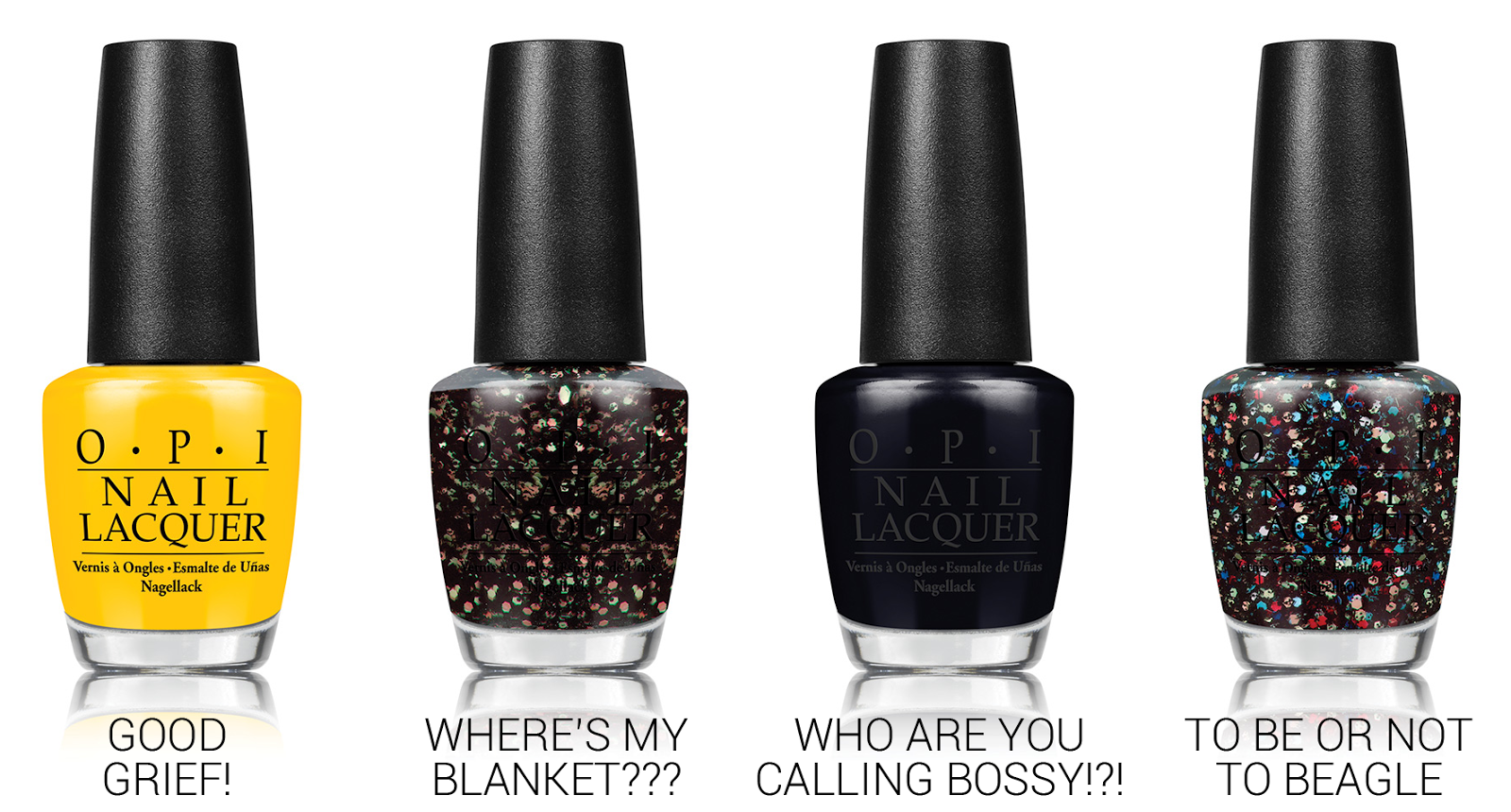 “‘It’s the Great Pumpkin, Charlie Brown’ is a classic, beloved film,” explains Suzi Weiss-Fischmann, OPI Co-Founder & Brand Ambassador. “Peanuts by OPI celebrates the fun, youthful nature of Charlie Brown, Lucy, Linus and Snoopy with four limited edition nail lacquer shades designed to capture the spirit of Halloween. With two crème and two glitter options, you can switch between a cheery yellow or chic black look, or try adding a layer of glitter for a unique finish.”

Each of the four shades is also available in the Little Peanuts mini pack, which is sold with ten nail decals ranging from popular Peanuts phrases like “Good Grief!” and “Pow!” to sketches of Snoopy and the signature squiggle of Charlie Brown’s shirt.

Peanuts nail lacquer shades each feature OPI’s exclusive ProWide™ Brush for the ultimate in application. Peanuts by OPI and Little Peanuts mini pack will be available beginning September 2014 at Professional Salons, including Chatters, Planet Beauty and ULTA. Peanuts nail lacquers will retail for $9.50 ($11.50 CAN) each; Little Peanuts mini pack will retail for $13.95 ($17.50 CAN). 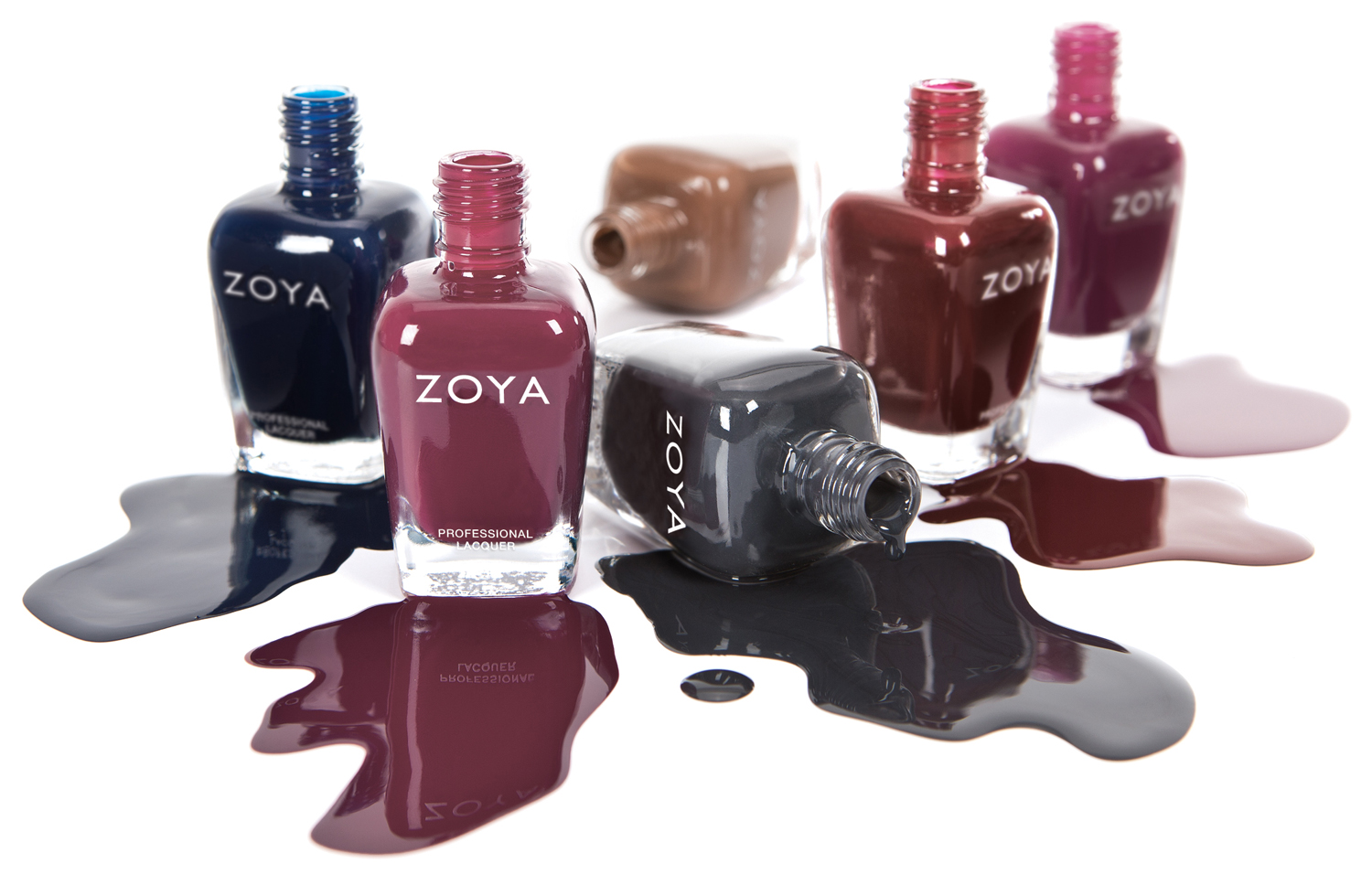 ZOYA IS THE HEALTHY COLOR OF FASHION!

$9 (US) Available on Zoya.com and at finer salons and spas.
Posted by Sarah Thompson at 10:30 AM 1 comment:

Email ThisBlogThis!Share to TwitterShare to FacebookShare to Pinterest
Labels: zoya

Oxygen Media ‘MANIpulates’ the hottest fashion trend of nail art into a creative and innovative competition series,“Nail’d It,” premiering Tuesday, October 7 at 9pm ET/PT. Hosted by Adrienne Bailon (“The Real”), “Nail’d It” pits 18 of the best up-and-coming nail artists against one another as they claw their way to the top to claim a life-changing grand prize of $100,000. The series premiere coincides with Oxygen’s rebrand on Tuesday, October 7th across all platforms, launching the network’s new logo and tagline, very real, targeting young, modern women.

"Nails are the ultimate fashion accessory and I couldn't be more excited to host 'Nail’d It,'" said Bailon."I've always been obsessed with nail art and I can’t wait for everyone to see the creativity, passion and talent of these 18 artists. They are going to be blown away!"

“For these emerging nail artists, this isn’t just a job, it’s their passion,” said Rod Aissa, Senior Vice President, Original Programming and Development for Oxygen Media. “Our young, female audience will relate and root alongside these everyday nail artists as they pursue their dream and compete on “Nail’d It” to be recognized as one of the best.”

In each episode, the talented contestants will face-off crafting flawless flat paint designs and over-the-top 3D masterpieces using everything from lacquers, gels and acrylics to embellishments and unorthodox materials. The winners and runners up from the first six episodes will compete in a high-stakes four-part finale until only one artist is left standing to win the grand prize and opportunity to have their designs featured in a cover story for Nail It! magazine.

Pushed beyond their creative limits, the contestants will be critiqued by a rotating panel of judges, including industry icon and leading expert on trends, Jan Arnold (@cndworld), CND’s Co-Founder and Style Director; Top “Man”-icurist, Tom Bachik (@tombachik), who polishes the nails of celebrities from red carpets events to sold out arenas; expert nail artist and celebrity manicurist, Terrance Terry (@terranceterry), known as the “Nail Villian” for his uncensored personality and ability to push the envelope; and distinguished judge of nail art competitions worldwide, Elaine T. Watson (@elainetwatson), Cuccio International’s VP of Marketing and Sales and Global Education Director. In addition, Nail It! magazine’s Editor-in-Chief, Stephanie Yaggy Lavery(@nailitmag), and People Style Watch’s Beauty Director, Holly Carter (@hollsbeauty), will serve as guest judges during the season.

For more information on the show, the judges and the contestants, please visit: http://www.oxygen.com/shows/naild-it. In addition, fans can check out the official Facebook page and join the conversation on Twitter using the hashtag #NailedIt.

“Nail’d It” is produced by Matador with Jay Peterson, Todd Lubin and Shye Sutherland serving as Executive Producers.
Posted by Sarah Thompson at 9:21 AM No comments:

Email ThisBlogThis!Share to TwitterShare to FacebookShare to Pinterest
Labels: nail'd it tv show
Newer Posts Older Posts Home
Subscribe to: Posts (Atom)
This blog was created as a companion to Chalkboard Nails to provide the latest nail polish and nail art news for people that want to stay in-the-know.