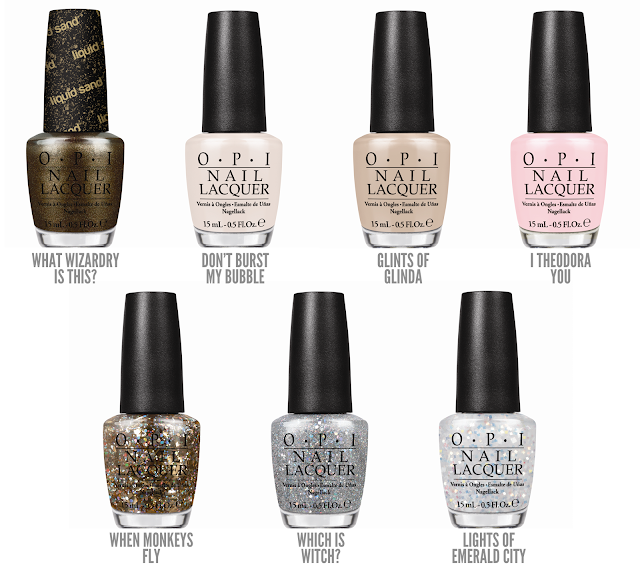 OPI announces the launch of six limited edition nail lacquers and a new Liquid Sand shade, inspired by Disney’s Oz The Great and Powerful. With an all-star cast that includes James Franco and Michelle Williams, this highly-anticipated film opens in theaters on March 8, 2013.

“OPI is very excited to take this fantastical journey with Disney,” explains Suzi Weiss-Fischmann, OPI Executive VP & Artistic Director. “Inspired by the magic of Oz The Great and Powerful, this SoftShades collection captures the whimsy seen in the film, from glittery shades packed with white, gold and silvery iridescent confetti – Lights of Emerald City, When Monkeys Fly! and Which is Witch? – to soft neutrals in white, beige and pink – Don’t Burst My Bubble, Glints of Glinda and I Theodora You.

“The new Liquid Sand nail lacquer – What Wizardry is This? – features OPI’s groundbreaking technology for a textured, matte finish infused with reflective sparkle,” adds Weiss-Fischmann. “This rich taupe hue was designed for James Franco’s character, the great Wizard of Oz, and is sure to make a bold statement this spring.”

With a mix of soft crème and warm glitter shades, the line is ideal for layering to create rich, complex looks. In addition to the Liquid Sand nail lacquer in What Wizardry is This?, the promotion includes:

As with all OPI nail lacquers, the shades inspired by Oz The Great and Powerful contain no DBP, Toluene, or Formaldehyde, and feature OPI’s exclusive ProWide Brush for the ultimate in application.

Newer Post Older Post Home
Subscribe to: Post Comments (Atom)
This blog was created as a companion to Chalkboard Nails to provide the latest nail polish and nail art news for people that want to stay in-the-know.